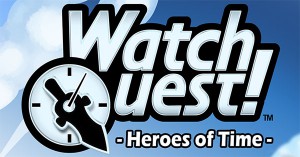 Coinciding with the official Apple Watch launch on Friday, a slew of apps and games are making their debuts. One of the early hopefuls is WayForward, which last week unveiled its Watch Quest, hoping to get a jump on the competition.

Some developers have been awaiting the opening of the WatchKit application programming interfaces in full before they put the might of their software engineering ability into the Apple Watch. The WatchKit API limits developers to creating widget-like glances, Watch notifications, and side-loaded apps powered by the might of a paired iPhone.

WayForward, developer of DuckTales Remastered, aimed to light the way for game development on the Apple Watch. Because WatchKit has yet to be opened in full, WayForward used the side-load formula for Watch Quest.

Players choose their heroes and kit them out on their iPhones. They can then use their Apple Watches to guide their heroes along a quest that entails solving puzzles, slaying monsters, and searching for treasure.

If successful, Watch Quest and other games for smartwatches could redefine the wearables market. Gaming is positioned to go against one of the primary values of smartwatches, which is to help users disconnect from their digital lives, at least to a degree, according to Rich Weiss, Applause’s director of product marketing and lead Apple Watch quality evangelist.

Gaming is meant to immerse players into an experience, no matter how graphically and mechanically complex or simple it may be, he said. By encouraging users to stay locked into their technology, smartwatch games could hit wearables where they’re most vulnerable.

“Apple claims the Watch has about an 18-hour battery life, if you’re glancing at your watch about 40 times a day,” Weiss told TechNewsWorld, “but if you have a game that requires five minutes to play, then you aren’t respecting that battery life. Developers have to figure out a way to make games quick hits.”

There are two models smartwatch gaming may take. For persistent games, such as FarmVille, Watch wearers may use their smartwatches to check in and maintain their plots.

Though the jury is still out, the Apple Watch’s early record-breaking sales have gotten people talking about smartwatches.

The Apple Watch may follow the path of the early iPhones, Weiss suggested. They were good at what they did, but they became great when they got developers and the app store behind them, he said.

“I think 2015 will be the year that people buy them and don’t know what to do with them,” he predicted. “Once enough people buy them, developers will start finding new and novel uses for them to make them better.”

The popularity of the Apple Watch could benefit many companies besides Apple, noted Charles King, principal analyst at Pund-IT.

Those uninvested in Apple’s ecosystem won’t have access to the Apple Watch, so there will be plenty of opportunity for outsiders to leverage Apple’s success for Android Wear devices.

“I think the Apple Watch’s success will open the eyes of a lot of other vendors,” King told TechNewsWorld, “and show them that there is still great deal of untapped potential in the smartwatch market.” End