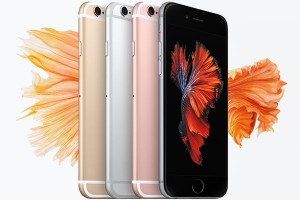 Credit Suisse lowered its earnings estimates for calendar year 2016 by 6 percent, based on Apple cutting component orders by as much as 10 percent due to the weak demand, according to a report by analyst Kulbinder Garcha.

The reduced demand likely is due to a number of factors, including currency volatility, the lack of attractive apps related to the force touch function, and other macro uncertainties, Credit Suisse said.

Earnings for calendar year 2016 will come in at US$9.81 per share, below consensus estimates, Credit Suisse projected.

Apple fell 3.1 percent from around $120 to about $117 following publication of the report last week, and the downturn has persisted. As of mid-day Monday, shares were selling for around $113.

A growing concern regarding Apple is that the company is heavily dependent on iPhone sales for its business model and needs to diversify its product lines and services, as well as grow additional markets.

Apple has made an effort to grow its product line beyond the core personal computer and mobile phone market, but there are indications that demand for those products has been a bit sluggish in recent weeks, said Charles King, principal analyst at Pund-IT.

Apple TV reportedly will be featured in Black Friday deals and Apple Watch sales have been “less-than-stellar,” he pointed out.

“No investor likes a company whose eggs are concentrated in very few baskets,” King told the E-Commerce Times. “It’s like GE mostly selling light bulbs or Kellogg’s focusing largely on corn flakes. In that kind of a situation, a major shift in technology or public taste can cause grievous injury to companies and their shareholders.”

There have been reports that Apple may have front loaded its iPhone and IPhone 6s by adding dynamic markets like China to its initial product launch for the first time, added King.

Another potential source of concern regarding mobile phone sales are reports that Apple is offering major subsidies of iPhones in the India market, which is considered one of its key points of expansion, Technalysis’ O’Donnell told the E-Commerce Times.

Apple has been offering discounts of more than 34,000 rupees (US$515) to subsidize sluggish sales there, The Times of India reported.

“The problem in all these other markets is that phones are completely unsubsidized, and they are just staggeringly expensive for the majority of people,” said O’Donnell.

Apple is going to have to shift its focus more toward services than continued product upgrades to progress on a growth curve, he suggested — for example, more in the way of television service in addition to Apple music.

There have been reports that Apple may be about to accelerate the rollout of its new iPhone 7 in 2016, but they are unconfirmed. Apple did not respond to our request to comment for this story.

Absent some major new technological innovation, Apple may be reaching a peak for expanding the market for smartphones in the U.S., analyst Jeff Kagantold the E-Commerce Times.

“Smartphones will be with us going forward, but the rate of customer acquisition will slow,” Kagan said, “especially since there is no earthshaking innovation in the newer devices.”