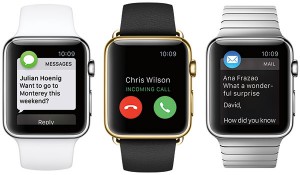 Best Buy on Monday said it would begin selling the Apple Watch in 100 of its stores on Aug. 7, as well as on BestBuy.com. As the holiday season rolls in, it expects to expand that number to 200.

Sixteen models will be available at the Best Buy outlets, including the Apple Sport and Apple Watch models in 38- and 42-millimeter sizes. Best Buy also will sell 50 accessories, including wristbands, screen shields, stands and chargers.

“The Apple Watch is a big addition to our stores and website, and we know our customers want it,” said Jason Bonfig, senior category officer at Best Buy.

Moving the sale of its smartwatch from company to mass market channels is consistent with Apple’s past new-product marketing efforts.

“Apple has always planned to expand the retail presence of the Apple Watch once it got enough product made,” said Creative Strategies President Tim Bajarin.

“This follows Apple’s normal retail strategy that starts in Apple Stores and eventually gets into broader distribution,” he told the E-Commerce Times.

“Apple has had a presence in Best Buy for many years, and having the watch available there simply provides more purchase points, as they do with many of their other flagship products and accessories,” noted Brian Blau, a research director at Gartner.

Releasing the Watch to Best Buy does involve some risks, however.

“Apple cannot micromanage the customer journey at Best Buy to the same degree as it can in its own stores,” observed James Moar, a research analyst with Juniper Research.

“It risks some consumers being put off by an imperfect demo by staff, although Apple is likely going to focus on training Best Buy sales reps to demo the Watch effectively,” he told the E-Commerce Times.

However, that’s likely to be less of a problem now than upon the watch’s introduction.

“At this stage in the process, consumers are driven heavily by the brand of wearables and the potential of the product rather than its actual capability,” Moar said. “This means that people are likely to go into the store expecting an Apple Watch, and are unlikely to be put off by a poor initial product experience.”

Since there haven’t been any real killer apps for the Apple Watch as yet, there’s a chance that release to the mass market could be premature.

“Its a small risk, but the alternative is a bigger risk — not making the watch widely available, which would mean Apple isn’t confident about the prospects of the watch,” Gartner’s Blau told the E-Commerce Times.

Despite reports that the Apple Watch isn’t selling as expected, Apple indicated that everything is copacetic.

“Sales of the watch did exceed our expectations, and they did so despite supply still trailing demand at the end of the quarter,” CEO Tim Cook said during last week’s earnings call.

However, the company chose to hide those sales numbers in the “other” category on its balance sheet.

Wall Street analysts apparently have cut sales estimates for the wearable nearly in half — from 4 million units sold to 2.53 million.

Moreover, many of those 2.5 million watches were sold shortly after the Apple Watch’s launch.

Sales have plummeted to fewer than 20,000 units a day, down from an average of 200,000 a day during the Apple Watch’s launch week, when the company sold 1.5 million units, according to figures Slice Intelligence releasedearlier this month.

If sales are sagging, then the Best Buy announcement could be a boon for the tech timepiece.

“Right now what the Apple Watch needs most is an expanded channel footprint, and Best Buy provides that in North America,” Canalys analyst Daniel Matte told the E-Commerce Times.

Opening the Best Buy channel may be an indication that Apple has tapped out fanboy demand for the Watch.

“This move signals that sales of the watch to dedicated Apple users has probably reached a saturation point, meaning that the company needs to seek out new buyers if it wants to keep sales momentum,” said Charles King, principal analyst at Pund-IT.

“This point squares with analysts who claim that sales of the Apple Watch tailed off dramatically a few weeks after its introduction,” he told the E-Commerce Times.

The Best Buy move may be telling the market something about the Apple Watch itself.

“The company’s willingness to engage third party retailers so rapidly might also signal that the plan to position Apple as a luxury brand may have misfired badly,” said King.

Apple’s hopes of shedding the geeky smartwatch image also may be going by the boards, suggested Juniper’s Moar. “The lack of a launch into more fashion-based retail is potentially a tacit admission that the Apple Watch, along with other current smartwatches, is still focused on technology rather than fashion.”